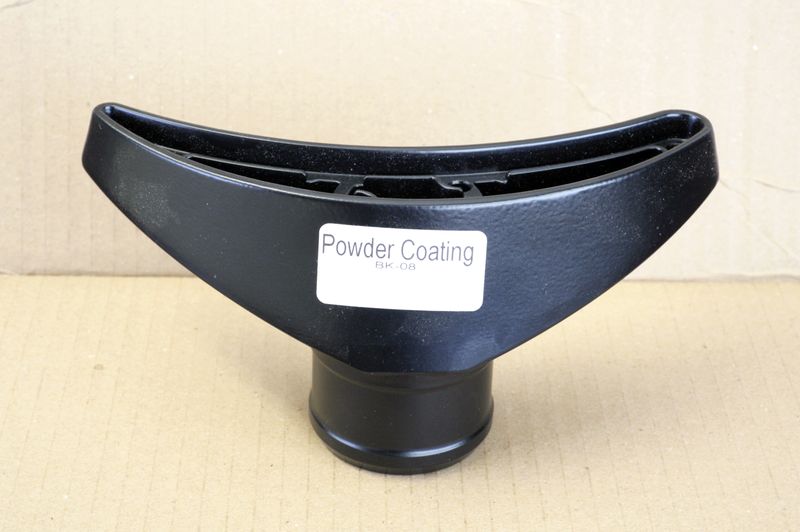 Powder coating is a type of coating that is applied as a free-flowing, dry powder. The main difference between a conventional liquid paint and a powder coating is that the powder coating does not require a solvent to keep the binder and filler parts in a liquid suspension form. The coating is typically applied electrostatically and is then cured under heat to allow it to flow and form a "skin". The powder may be a thermoplastic or a thermoset polymer. It is usually used to create a hard finish that is tougher than conventional paint. Powder coating can be used for protective and cosmetic coating of aluminum die casting components.

Because powder coating does not have a liquid carrier, it can produce thicker coatings than conventional liquid coatings without running or sagging, and powder coating produces minimal appearance differences between horizontally coated surfaces and vertically coated surfaces. Because no carrier fluid evaporates away, the coating process emits few volatile organic compounds (VOC). Finally, several powder colors can be applied before curing them all together, allowing color blending and bleed special effects in a single layer.

While it is relatively easy to apply thick coatings which cure to smooth, texture-free coating, it is not as easy to apply smooth thin films. As the film thickness is reduced, the film becomes more and more orange peeled in texture due to the particle size and glass transition temperature (Tg) of the powder.

Most powder coatings have a particle size in the range of 2 to 50 μ (Microns), a softening temperature Tg around 80 °C, a melting temperature around 150 °C, and are cured at around 200 °C. for minimum 10 minutes to 15 minutes (exact temperatures and times may depend on the thickness of the item being coated). [1] For such powder coatings, film build-ups of greater than 50 μ (Microns) may be required to obtain an acceptably smooth film. The surface texture which is considered desirable or acceptable depends on the end product. Many manufacturers actually prefer to have a certain degree of orange peel since it helps to hide metal defects that have occurred during manufacture, and the resulting coating is less prone to showing fingerprints.